Meet our Co-Heads of Wellbeing: The benefits (and science) of having dogs in the office

I sat down with FaultFixer's joint heads of well-being to discuss their role in our team and the continued role of ...

I sat down with FaultFixer's joint heads of well-being to discuss their role in our team and the continued role of mental health as we emerge from lockdown measures here in the UK. Unfortunately, Arthur fell asleep at his desk/cushion and Na'ila wandered off to explore the neighbouring office's lunch options, but at least the thought was there.

Na'ila is nine months old, very young to reach a coveted Head Of position, and Arthur is the more experienced of the two, being in place for nearly two years. Both are cocker spaniels. We've found that having office dogs creates a less stressed, friendlier environment whilst maintaining focus. Dogs in the office have been linked to greater trust amongst team members and there is a positive oxytocin cycle in dog-human interactions. Behaviour in groups where dogs were present was rated more cooperative, active and attentive by those watching on. Outside the office, dog ownership has been linked to improved mental health, especially in dealing with PTSD and depression. We are aware some are not comfortable with office dogs and we inform potential recruits early in the interview process and have a non-dog section of the office. Evidence from the International Journal of Environmental Research and Public Health suggests that pets provide a source of social support, something you’d usually get from friends or family and that the movement towards dog-friendly offices is growing. This is especially driven by the big American tech companies, which have built many of their big West Coast campuses with dogs in mind. Amazon and Google’s early history was dominated by dogs in the office, which is borne out in their current policies. Early proponents were also Mars and Nestlé, complimenting their pet food brands.

"Arthur has been co-Head of Wellbeing at FaultFixers for some time now, and I must say he is doing an excellent job; it’s a real testament to the rigorous recruitment processes we run, which we’ve developed to be a pretty tough, dog-eat-dog process, with zero nepotism whatsoever." - Tom, CEO (& Arthur's dad) 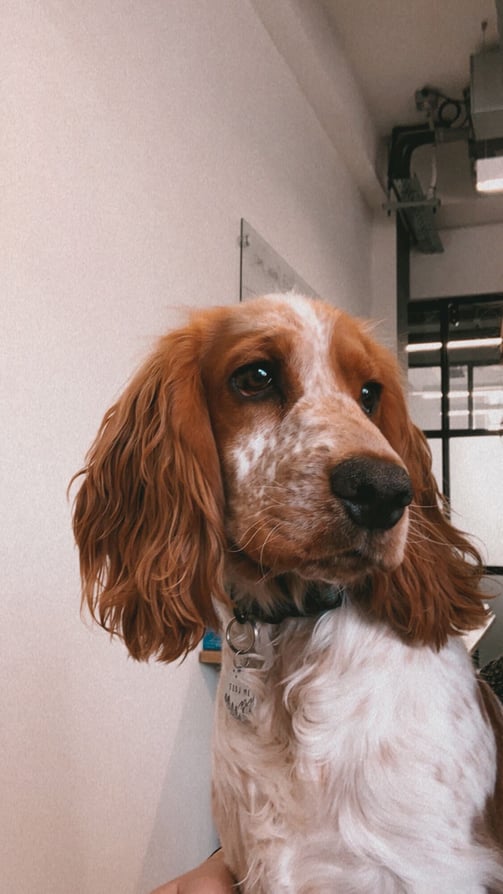 "I'm incredibly proud of what Na'ila's achieved in her short time at the company and will be watching her career with interest. I was shocked when she was hired so young but I can see now that she was a natural fit for the role." - Frankie, Marketing Lead & Na'ila's "dog mum"

All individuals mentioned in this piece solely received treat-based remuneration for their time. If you would like to book either of our Heads of Wellbeing for speaking or walking engagements, please contact hello@faultfixers.com.

Meet the dogs of Amazon (aboutamazon.com)

IJERPH | Free Full-Text | Dogs in the Workplace: A Review of the Benefits and Potential Challenges (mdpi.com)

Paws for thought: why allowing dogs in the office is a good idea | Work & careers | The Guardian

My first job was during a pandemic: Hebroyn's Story

Two of our very own Sales Development Representatives joined us straight out of University and bang in the middle of a global pandemic.

What it’s like starting my first job, during a pandemic: Harrison's story

I remember standing on the university campus back in 2020, taking it all in one more time before accepting that my university journey was coming to...

The Future of Facilities Management....Software

Facilities Management is the unsung hero of the world, both for leisure and for work.